Artificial Womb attended Festival of the Zine in Newcastle on May 28. The petrol to get there and back, as well as buying a little food on the road cost roughly £75, which made the £60 we made at the actual event (with a side-trip to Leeds to see Grace Petrie play at Belgrave Music Hall in Leeds) seem kind of… well it’s a financial loss isn’t it.

Still, it’s not very in the spirit of feminist arts solidarity to drive across the border and then not actually purchase any of the lovely girl power and fem-queer zines that were being touted at the zine fair. So, I set aside roughly £5 and bought some to take back with me. I guess it’s possible to justify them as being ‘market research’ or ‘samples of potential future distro stock’ or something. Look, running a business is complicated… I’m in this for the love of zines. Right? So, here’s what I bought*:

The girls (Emily and Hufi) who made Girl Love also made the mini zines Uncomfortable Women in Clubs & How To Wheatpaste, which I also bought cause they were awesome. 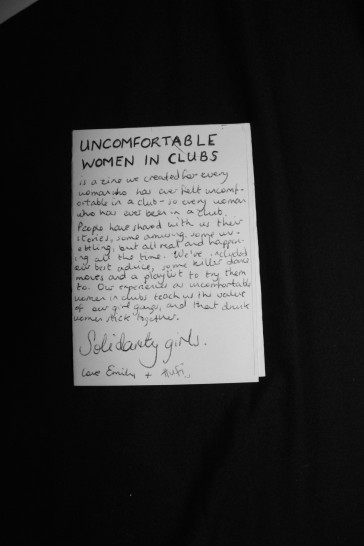 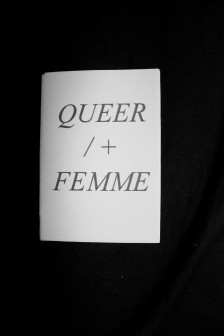 This mini zine was made by the folk at Art Nerds Zine Distro & was really nice because I HAD assumed that the girl with the long hair selling the queer zines was not actually… queer… and HAD assumed she was just helping her more obviously genderqueer friend with the stall out of ally-ship or something. So I really appreciated that she’d made a zine about people making that assumption and, shamed, thanked her for it. Frankly I should know better. 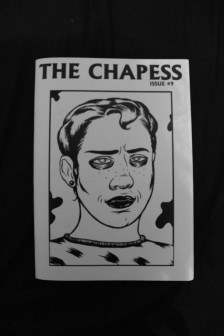 I have extra copies of these because the woman who made them came round at the end and asked the other zine sellers if we wanted her spare copies so she didn’t have to take them home. I swapped for them instead, because I’m going to redistribute them (probably for 50p each to match her selling price) and I’d not feel right doing that if I’d been given them for free. If you want one then just ask if you see me at a zine fair, I’ll probably have some with me. Nothing in that model makes me or Artificial Womb any money (I swapped for 6 of these zines for a £3 zine I sell… so a fair swap). Anyway, whatever, it’s possible I’ll donate them into a zine library somewhere down the line. Who knows.

Overall, this is a pretty decent haul. The event was really well organised by Bridget Hamilton of Verbal Remedy and they raised almost £150 on door ticket sales to help fund future events!

The only downside was that I slept in my car in a fairly insecure spot in Gateshead and witnessed another attempted suicide on the way there, but that’s just life.

*The Chapess #9 was bought for me by a woman helping out at the event whose name I didn’t write down because I didn’t think I’d be blogging about her and now I don’t remember it. But she was lovely. So thank you, woman who bought me The Chapess #9!